What is Thai Massage?

Traditional Thai Massage – A combination of acupressure and yoga-like stretching techniques that employs the use of the therapist’s fingers, thumbs, elbows, arms and feet on the body’s muscles, pressure points and energy lines (“Sen”) to clear energy blockages and balance the body’s energy.

Thai Massage can be performed either on a massage table or upon a cushioned floor mat. Loose-fitting, comfortable clothing is worn by the client at all times, and no creams or oils are used. 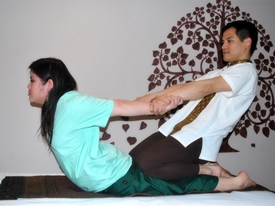 Traditional Thai Massage is sometimes called “Nuad Boran” which translates as “Ancient Massage”. It was founded by Dr. Jivaka Kumara Phaccha, who was a private doctor of the Buddha, over 2,500 years ago. It was introduced to Thailand at the same time as Buddhism – as early as the 3rd century B.C.

In the past, Thai Massage techniques were passed down from generation to generation orally within families as most people could not read or write. The formal manuscripts were written in ancient Pali by the Buddhist monks. In 1767, many of the manuscripts were destroyed by the Burmese invaders. 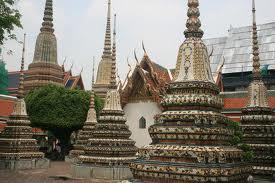 In 1832, King Rama III commanded his people to collect the remaining fragments of the original texts carved into stone as descriptive epigraphs at the Pra Chetupon Temple in Bangkok (popularly known as Wat Pho).

The theoretical foundation of Thai massage is based on the concept of invisible energy lines running through the body called “Energy-Based Healing System”. The system consists of the following: